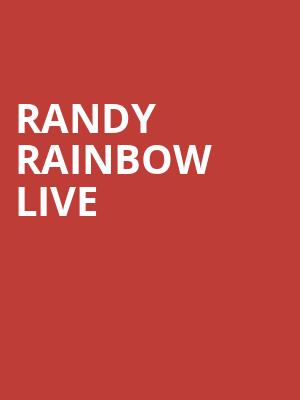 A new voice from the Joan Rivers, Don Rickles kind of old-school comedy where nothing is off the table, certainly not in politics!

Randy Rainbow Is Taking His Political Satire On Tour

Randy Rainbow (yes, Rainbow is, in fact, his real last name) was born with the sort of moniker that heralds a glorious purpose in life. The New York comedian found his calling when he released a series of original Broadway-tinged-show-tune and pop spoof videos in response to the theatrics of the 2016 presidential election, going viral and amassing close to a million follows on his social media platforms. Don't miss his biting wit when he hits the road this year, bringing songs like Putin and The Ritz, and How Do You Solve A Problem Like Korea along for the sarcastic ride!

Sassy and unafraid to say exactly what he feels, Rainbow has risen as an LGBTQ advocate in the face of the USA's political turmoil. Prepare to laugh until your sides ache!

Richard Sweeney: “I needed that!”

The very much anticipated sold out show was fabulous! The sound system... more

His parodies are brilliant! His singing voice is terrific! His stage... more

Sound good to you? Share this page on social media and let your friends know about Randy Rainbow Live at State Theatre.