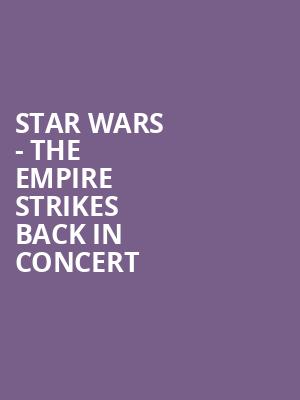 Star Wars - The Empire Strikes Back In Concert

The superior Star Wars sequel, accompanied by a live score

Why See Star Wars - The Empire Strikes Back In Concert?

Join your local orchestra as they present a screening of George Lucas and Lawrence Kasdan's 1980 sci-fi masterpiece, with John Williams' unforgettable score played live in accompaniment.

Regarded by many as the strongest entry in the Star Wars franchise, The Empire Strikes Back sees the rebellion doing battle with the Galactic Empire once again. Featuring the first appearance of Lando Calrissian, the snowy AT-AT battle on Hoth, and Luke's memorable training sessions with Yoda, this sequel builds upon A New Hope with a darker tone and an even more epic scope, and includes one of the most famous twists in movie history.

Sound good to you? Share this page on social media and let your friends know about Star Wars - The Empire Strikes Back In Concert at State Theatre.